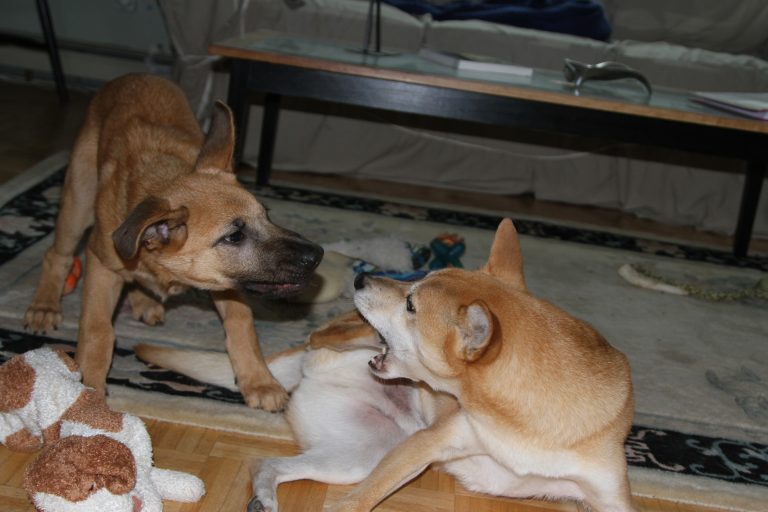 I’ve been through it too many times—two dogs who get along beautifully suddenly don’t.  It happened again last Sunday when 25 pound, 13 year-old Kochi, and 65 pound, 10 month-old Larry had a kerfuffle … more correctly called a fight.  It started with an accident.

Larry was on the bed.  When he jumped off in his mindless, blind, teenage fashion, he came down on top of Kochi, who was simply lying on the floor.  Startled and no doubt hurt being landed on by a 65-pound goofball, Kochi reacted as a dog (and many other species including humans) would when blindsided.  He attacked, letting Larry know he did something wrong.  Kochi’s reaction was absolutely normal and under most circumstances would have ended with a short, sharp reprimand to Larry—a quick, snarling snap that clearly says, “DON’T DO THAT!”

Unfortunately, the situation escalated when Larry, trying to get away from his angry “brother,” ran into the bed footboard, and couldn’t avoid Kochi’s attack.  Most likely frightened by the intensity of Kochi’s reaction, and possibly hurt, Larry, too, reacted normally:  He became defensive, and attacked his attacker.  The result was probably about five or six seconds of a dog fight—a few seconds that seems to last forever.  We separated the dogs and did a thorough post-fight check-over.  The only damage was a small cut on Kochi’s head.  Larry was physically unscathed.

These are not dogs that are prone to fighting.  Larry is a lover, and Kochi would sooner be left alone than fight.  But the confluence of errors resulted in what can only be called “normal” reactions with an undesirable outcome.  The catalyst was an unforeseeable “oops”— unpredictable and sudden.   The result, a brief skirmish.

In the aftermath of even such a brief scuffle, if and when there’s a fight between two dogs, it’s important to keep them separated for a few hours to allow for adrenaline to subside and tempers to cool.  In some cases, this may take as long as 48 hours.  Putting two pugilists together before they’ve had a chance to calm down is inviting a recurrence, and can lead to a greater, even permanent problem.

We kept Larry and Kochi separated overnight.  The next morning I had Larry on leash when I let the dogs out into the yard together.  I knew Kochi wouldn’t attack Larry, nor was I worried that Larry would start a fight.  But Larry typically greets Kochi every morning by pouncing on him in his friendly, obnoxious way.  I thought that if Kochi felt the need to “tell him off” again it might rekindle the altercation.  Until I was sure they were back to normal, I didn’t want to take any chances.   Interestingly, ever since the fight, Larry has been most respectful of Kochi—a lesson that I hope he has learned permanently.

I think the dogs have gotten past the trauma of this event.  I’m still not sure that I have … but it’s getting a little better with each day that they are back to normal.