You are here: Home / Behavior / Dog with Asperger’s Syndrome

Some behaviors can't be trained away. 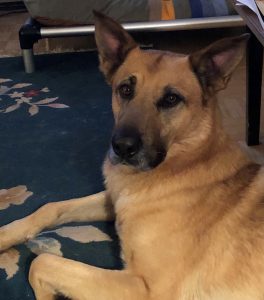 I have long thought that my Chinook, Larry, is on the autism spectrum.  A recent event really drove home what I’ve suspected for years—Larry has Asperger’s.

There are several areas that correspond with Asperger’s behaviors in people.  Larry engages in repetitive behavior, does not read or respond to most body language and facial expression, has inappropriate greeting behavior  with both people and dogs, lacks body awareness, doesn’t react to anger, cannot relax when overstimulated, and has laser focus on inappropriate things or at inappropriate times.  But he’s very friendly and smart.

Larry’s repetitive behavior is circling—always to the left.  It’s not OCD—he does it when he’s excited.  When we’re getting ready to go out and he’s in a small space, he spins wildly, always to the left.  In larger areas, he trots around to the left.  When we did agility training and I wanted him to go right coming out of a tunnel, he would do a 270 degree turn to the left, completing three-quarters of circle.  It reminded me of what my mother used to do when she was driving to avoid making a left turn—she’d make three rights.  In scentwork, which he loves and is good at, when searching an area, he’s always moving to the left.

Even as a young puppy in our Puppy Place daycare, Larry didn’t respond normally to other puppies’ communication.  He has always been overly enthusiastic when greeting another dog, completely oblivious to what that dog is “saying.”  The dog’s body language and facial expression are saying, “Take it slow!  You’re being rude, Dude!” but Larry is oblivious.  He’s very friendly and loves other dogs, but I have to restrain him from greeting because he comes on so strong, and dogs don’t like that.  Neither do I.

Larry has little body awareness—he’s always stepping on my feet and is the proverbial bull in a China shop.  When he jumps up on the sofa next to me, he almost always pushes off from my foot and bumps into my knee.  With a good four feet of space that he could be in, he’s right by my leg and hurts me on the way up.  Aside from bumping me, he often likes to be close—which is nice.  When he lies on the couch next to me, he puts his paw on my leg, or curls up touching my side—as he is now as I write this.

When he hurts me and I react out of frustration or anger, Larry isn’t bothered.  There is no hint of anxiety.  This is good in that I’m not damaging our relationship when I react—but it is not a normal dog response to strong, human emotion.  Interestingly, although he doesn’t sense my frustration, Larry is sensitive to sadness and grief.  He was a great comfort to me when my husband passed away.  He’d lie next to me with his head in my lap—so loving and sweet.

And finally, the event that forced me to put all this together and recognize that Larry is on the spectrum.  He was at my left side on leash and wanted to get to a tree on the right to smell.  He pulled in front of me, tripping me as I was walking forward.  I hollered as I tried to catch my balance, but he didn’t react to me at all.  He pulled harder and since I was already unbalanced, I went down like a felled tree—off the curb, into the street, flat on my back.

If you’ve ever fallen around one of your dogs, you’ve likely experienced a normal dog’s reaction—licking your face, seemingly apologetic.  Larry didn’t do that.  In fact, he didn’t react at all.  Rather he stood on top of my legs totally fixated on sniffing the tree.  This total focus made  him oblivious to me or my predicament.  Even when I pushed him off me to get up, he didn’t react to me at all.  (I’m OK, by the way).

In retrospect, I put all these things together to reach this conclusion.  I have always half-joked that Larry is on the spectrum, but his lack of reaction to me falling was so uncharacteristic of normal dog behavior that it drove the point home.  Laser focus, tuning out everything else is an attribute of autism—and that was Larry as I lay in the street.

This doesn’t mean that I love Larry any less.   Actually, this admission helps our relationship.  Recognizing that behaviors that make me crazy, that I’ve been trying to eliminate or change for years through training are outside of his control—or mine—(and me, a professional trainer!), I actually feel more tolerant of the things I can’t change—and neither can Larry.  And It’s not his fault.

Every dog I’ve lived with has taught me something about dog behavior.  Larry has a new chapter all to himself.