Do you ever think about how your dog learns some things quickly, and others not? How the heck did he nearly instantly learn the sound of the cabinet door that holds the dog biscuits? How come he doesn’t use that same “intelligence” to learn to come when called? It’s very simple. It all boils down to consequences—good ones and bad ones. Put another way:  What’s in it for your dog?

Your dog’s every waking moment is filled with potential learning. As a puppy explores his environment—as he sniffs, scratches, tastes and feels—he’s learning.  Experiences are filed in categories such as “Feels good . . . do it again.” Or “Tastes nasty . . . avoid that!” Positive outcomes will be repeated, while those that have an undesirable consequence probably won’t be.

How quickly your dog learns from an experience depends on the impact of the consequence of that experience. Consider this: When you open a bag of potato chips, how many times did it take for your dog to learn that the crinkly sound of cellophane means “come?”

Let’s briefly explore good and bad consequences, and using them to speed learning.

What motivates your dog? What makes him want to perform a task, respond to a command, or make an effort?  What is the canine equivalent of a winning lottery ticket?

You may be thinking, “This is all well and good, but what does it have to do with getting the @%!#$* dog to stop jumping on the kids?” Simple. One of your jobs as your dog’s companion and trainer is to select and control rewards that motivate and enthuse as well as to recognize an inherent reward in a behavior we don’t like. 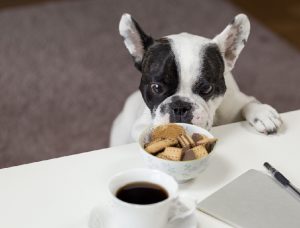 Here’s a common (and obvious) example: When your dog steals food from the trash or off the table, he’s receiving a reward—and a good one at that. Oh, I know, you didn’t “reward” him. Reinforcement doesn’t have to come from you for the consequence of his behavior is rewarding to your dog. Rewards can come from the dog’s own actions. Eating tasty food—even “garbage”—is certainly rewarding to a dog.  Your anger at your dog for being in the trash or stealing food doesn’t override the payoff for having done it.  So when your dog repeatedly does something you dislike, figure out what he’s getting out of it.

Some people want their dogs to work solely for praise. Certainly praise is a reward, and we use it. But in the great cosmos of praise versus prime rib, praise comes in a distant second. Think about this: When your boss commends you for a job well done, you feel good, don’t you? Compare that pat on the back to how you would feel if instead of praise you got a huge bonus and an all-expenses paid vacation. Hmmm . . . let’s see . . . an “attaboy” versus . . . two-weeks in Hawaii . . .

Then there’s the other type of consequence.

As the song says, “Life is 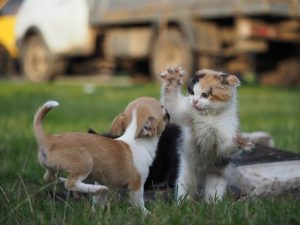 just a bowl of cherries.”  It can be sweet and delicious, but then there are the pits.  The reality is that sometimes life hands us an unwanted consequence—the other side of “Thorndike’s Law of Effect”:  Behaviors that produce unsatisfying, annoying or unpleasant consequences tend not to be repeated.

Dogs learn from undesirable consequences just as they do from the upside, the rewards and payoffs. Dogs learn through forming associations between the behavior and the resulting consequence—for good or ill.

The more immediate the association, the faster your dog will learn. Picture this: Your puppy spies a cat and curiously approaches. The cat puffs up, hisses angrily and swats the puppy on the nose with his claws. How many repetitions of this immediate consequence do you think it will take for the puppy to learn a healthy respect for cats?

It is helpful to let the dog know precisely what behavior ha earned a consequence, by using a “you lose” marker.  At the moment your dog commits an undesirable act, say “nope” or utter a sound such as “Unh!” We prefer this short, sharp sound or a brisk “nope” rather than saying “no!” After all, we say “no” a lot – and not just to the dog.

For some, sensitive dogs, this negative sound is sufficient punishment. If, however, your dog doesn’t respond to the sound alone, follow the “no marker” with the consequence—something your dog wishes wouldn’t happen, but never involves pain or corporal punishment. For most dogs, the most profound punishment is to deprive him of something he wants. This can be as simple as withholding a treat, losing access to your attention, removing him from the fun, or abruptly ending a game.

For most dogs, the end of fun is a powerful punishment, so we use “time-out” a lot. No, we don’t put the dog in a corner facing the wall to ponder his bad behavior. A time-out can be as simple as turning your head away to remove your attention. You can also put him out of sight in another room or in a crate, or put him on a down-stay.

For how long? The loss of attention can be as brief as a head turn for a second or two, 10 to 15 seconds in a crate – or longer if you need. The point is quickly made and sends an effective message.

Oh, we know, you were always told never to use the crate as punishment. Your dog will not develop a dislike of being crated if you occasionally physically place him in it for a brief time-out, while every other time you praise and give him a treat when he gets into it voluntarily on cue.

Here an example of using a time-out consequence:

The upside and downside

Teaching your dog civilized behavior means giving him clear choices – the desirable earns a reward, and the unwanted earns a time out. Make these choices clear to your dog and you’ll have the dog of your dreams.