Fear of new (and some familiar) situations 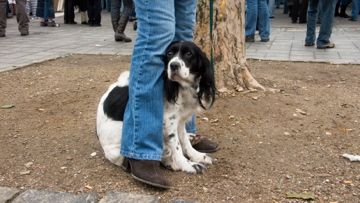 Years ago I taught dog training classes at a location with a lawn jockey statue positioned by walkway into the building.   Puppies and dogs would pass this little guy each week, often relieving themselves on him.  Despite this regular interaction, every so often a dog would act as if he’d never seen this statue before, barking hysterically with hackles raised, and absolutely refusing to either approach or walk past the jockey.   I’d learn about the dog’s behavior when the owner would come in without her dog, apologetically explaining that they wouldn’t be in class this week, because she couldn’t get her dog past the lawn jockey, and had left him in the car.  Confused and upset by this sudden change in the dog’s behavior, the owner was always relieved when I laughingly explained that this was perfectly normal—and fixable.  Their adolescent dog was experiencing the second “Fear Impact” period—also called the “Fear of New Situations” (FNS).

FNS is marked by the dog’s reluctance to approach something familiar—as if they’re seeing it for the first time—and/or an unwillingness to approach new things.  A dog’s behavior may range from slight caution, anxiety or hesitation, to downright fearful refusal.  FNS is an adolescent phenomenon that may occur sometime between four and 18 months of age.  It may also occur more than once, especially in large breeds.

Even slight changes in the dog’s environment can send the dog into a tizzy—such as I experienced yesterday with Larry, our eight-month-old Chinook boy.  In addition to the typical adolescent behavior changes he’s going through—selective hearing, escalated chewing, and testing his wings—Larry is definitely going through FNS.

We keep the cat’s litter box in our laundry room, so we keep the dogs out of that area unless we’re there to be sure they stay away from it.  Even with limited access, Larry has been in the laundry room many times.  But yesterday he refused to enter it.  He balked in the doorway, and wouldn’t come over the threshold.  Noticing his reluctance, I got a treat and invited him to take a few steps forward to get the treat.  He leaned in to take it, but if his foot had to step over the threshold, he wouldn’t move.  What was different in the laundry room?  All I could think of is that the clothes dryer was running.  I turned it off, but Larry was still unwilling to come into the room.

An hour later, when I went down to get the dry clothes, Larry came with me and happily entered the laundry room.  This is typical of a dog going through FNS.  If you ignore the behavior and relieve the dog by removing him from the stress-producing catalyst, or jollying him (see below), the dog won’t be impacted beyond that moment.

Here are a few other examples of FNS:  I recall when one of my English Mastiffs was about 10 months old, she suddenly started barking hysterically at the Christmas tree that had been up for several weeks.  She reacted as if it had just suddenly appeared in our living room.

A friend’s eight-month-old Rottweiler suddenly became reluctant to meet new people, despite having been incredibly well-socialized her whole life.

I’ve often spoken to dog owners who describe how their adolescent show dog behaved beautifully at a Saturday dog show, but on Sunday wouldn’t let the judge come near them, backing away and acting frightened.

My theory—and it’s just a theory, but it’s based on loads of anecdotal information—is that this fear reaction is related to adolescent growth spurts.  It’s as if the teenage brain isn’t able to deal with “reality,” and suddenly goes into a tizzy—a temporary tizzy.

[On a side-note:  I’ve found that giving my dogs 50 mg. of Vitamin B-Complex (with food) often helps relieve their anxiety in these previously familiar situations.]

Most importantly, don’t make a big deal of the dog’s fear.  Remove him or her from the situation, if possible, and try it again at another time or another day.  If you have the time and inclination, patiently and laughingly approach the fear-producing object, and interact with it.  Called the “jolly routine,” this is what I’d recommend for my students do with the lawn jockey—crouch down by him and laughingly chat with him.  After a minute or so, their dog would approach to see what they were doing, would sniff the jockey and recognize that it hadn’t changed, and they were good to go to class.

The worst thing to do with FNS is to force your dog to do something he’s frightened of.  It’s also not a good idea to soothe or praise the dog’s fear in this situation.  That can unwittingly reinforce the dog’s fearful behavior, while using force may lead to a permanent fearful response.  The best approach is to be patient, be jolly, remove your dog if possible, and know that adolescence is just a period—and it’s my fervent hope that it’s short-lived.