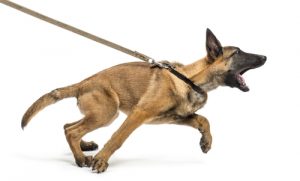 Every so often two dogs attending our doggie daycare will meet in our lobby or hallway, and start barking and lunging at each other in a not-very-friendly way.  The alarmed owners quickly pull their dogs away from each other.

“I hope these dogs aren’t in the same group!” they say.  “It’s clear they don’t like each other!”  But that’s rarely the case.  Most often these two dogs get along beautifully, playing very well together.  So why do they lunge and bark so aggressively toward each other?  There are two significant differences between meeting in the hallway and off-leash play:  the presence of the owner and being on-leash.

Many dogs become possessive and/or protective of their owners.  While Rover and Fido may be best buddies, Fido better stay away from Rover’s mom … or else.  This is especially true of guarding breeds and mixed breeds—dogs whose genetics predispose them to be protective of “their own.”

Leash reactivity doesn’t happen just in a hallway.  Many dog owners deal with their dog’s reactivity when taking them for a walk.  Even spying a dog blocks away can cause explosive behavior in some dogs.  We’ve worked with owners who were walking their dogs late at night to avoid seeing any other dogs on the street.

On-leash reactivity can also be related to lack of socialization–and can be a fear response.  In this Post-Covid world, many dogs and their owners are venturing out in the world for the first time in months.  Dogs and puppies adopted during the shut-down may be seeing new people and dogs for the first time.  Even dogs that were adopted before quarantining may need to re-learn social behavior that has not been practiced for months.  Like any “habit” or experience, if we haven’t done it for a while, we are rusty until we’ve practiced.

Two things happen when a dog is reactive toward another dog or person.  First, the other dog/person leaves or moves away.  So if the dog’s reactivity was fear-based, the increased distance relieves the dog’s fear, thereby reinforcing the reactivity.

Second, leash reactivity is exacerbated by our automatic response to our dogs’ aggression—physical restraint, pulling the dog back, pulling his head up and often pulling the front feet off the floor.  This restraint prevents the dog from displaying important body language to diffuse hostility.   Head carriage and body posture play an important role in communication between dogs.  Often called “Calming Signals,” when a dog is on leash, his posture and head carriage—especially when the dog is being pulled away—are not able to display what the dog needs to communicate to diffuse hostility.

Holding a dog back also increases frustration and builds adrenaline, which can increase explosive behavior.  This aggressive behavior may occur when on-leash, but not when off-leash, such as in our daycare playgroups.  That is why, when these same dogs are playing in daycare, unrestricted by a leash and collar, they are best friends, but not when they’re on leash in the hallway or lobby.

In addition to impacting the dog’s ability to communicate “calm,” pulling the dog activates the dog’s “opposition reflex.”  This is a natural response that we all have.  It is what a human does, for instance, if someone pushes against her right shoulder.  She leans into the pressure in opposition to it.  Otherwise she might fall over.

When a dog pulls on leash—or the owner pulls back on the leash—it activates the opposition reflex.  When moving through a crowded area, such as in our hallway moving toward the exit at daycare, or when passing another dog on a narrow sidewalk, it is natural and automatic to tighten the leash.  The dog then works in opposition to the pressure—pulling harder.  Similarly, if a dog stops moving and the owner tries to pull a dog forward, the dog may well balk, pulling backward in opposition to the pressure.  It isn’t that the dog is being “stubborn”—which many dog owners assume.  Rather, it’s a reflexive physical reaction.

This situation may also occur at a dog park when two dogs meet on leash.  But what’s an owner to do?  Clearly, relaxing the leash and giving into the dog’s pulling will not have a good result!  Or will it?

Next, see my blog post on how to deal with and eliminate leash reactivity.