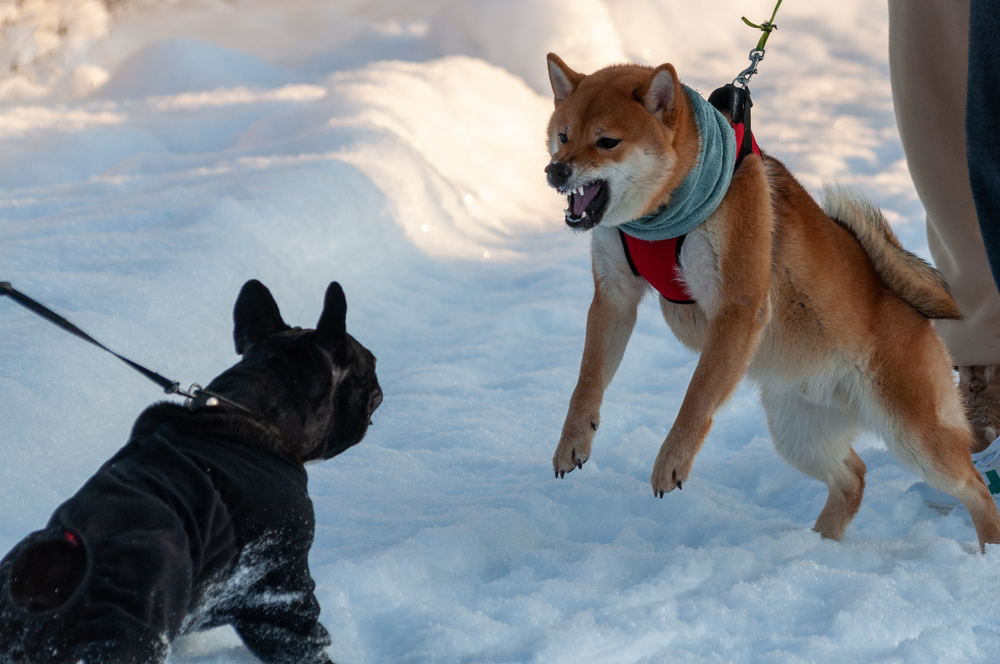 Typically, the first time a dog displays leash reactivity, the owner is shocked and upset.  It is a normal human reaction to pull the dog away from whatever he’s reacting to, and let the dog know that this behavior was WRONG!  We verbally chastise the dog: “Bad boy!  That’s unacceptable!  Stop it!!” At the same time, the trigger also moved or is moving away.

The first time this happens, the owner may not be aware of why the dog reacted as he did—what initially started his leash reactivity.  The common motivations are:

While it can be helpful to understand, it is even more important to understand the three things that resulted from your dog’s behavior.

The next time you’re walking your dog when a trigger appears, you may notice it before your dog does, so you tighten up on the leash.  Even if you don’t see it first, the moment you notice your dog has tensed, you’ll tighten the leash.

Applying leash pressure, as noted in Leash Reactivity – Part 1 triggers your dog’s opposition reflex—you pull back, he pulls forward.  Additionally, your reaction lets the dog know that you’re stressed or worried.  That means there’s something to be worried about. “Aha!” thinks your dog.  “I KNEW that (trigger) was bad!  Mom doesn’t like it either!!”  And finally, we react again in anger and embarrassment, hollering at the dog.

The result of these human reactions is that the dog wants to keep the trigger even further away!  “I don’t want my human to be upset, and seeing that (dog) upsets him.  And I get punished!  I really, really HATE that (trigger).  Next time I’ll let him know when he’s even further away.”

Can you see how the history of your dog’s reactive behavior has not only eliminated it, it has made it worse?  But all is not lost.  It is possible to eliminate leash reactivity.  There are three elements:

Your dog’s threshold is the distance at which your dog reacts.  This is a critical element.  From the moment you start to address your dog’s reactivity, you never want your dog to react—ever again.  While this may be unrealistic (see “Oopsies”), you want to do your best to keep your dog “under threshold”—far enough away that your dog does not “explode.”  The goal is for your dog to see the trigger without getting upset—staying under threshold.

Keeping the dog below threshold is critically important.  Your dog has learned from the previous experiences that when he blows up, the trigger moves away and/or the dog is moved away from the trigger.  Keeping the trigger in sight, without the dog exploding is where you start your dog’s training,

It is important to be able to control both your dog’s behavior, and the behavior of the trigger.  This requires you to have the help of a friend or family member.  For example, let’s say your dog’s trigger is the sight of another dog—the most common trigger.  A friend with a dog will help create the situations that have previously triggered your dog’s reactivity—but for training, you need that person and dog to stay far enough away that your dog does not react aggressively.  It’s all about distance.

Your goal is for your dog to see a trigger without getting upset.  This is done by changing how your dog views the trigger.  At the start of training, “Trigger = BAD!”  Your goal is “Trigger = GOOD!”

Let’s say that you’ve discovered that your dog’s threshold is 30’.  As long as the helper dog is further than that, your dog doesn’t explode.  That doesn’t mean your dog isn’t aware that there is a dog 30’ away.  Of course he is.  So when your dog looks at the trigger, mark his glance with “yes” and give him a small treat.  You’re marking the dog for looking at the trigger—not at you.  Your dog may glance at you, which is fine, but the reward is for noticing the trigger.

There’s some judgment involved here.  The first time this happens, your dog may clearly be in a “guarding” mentality.  If you were able to read his mind, he’s likely thinking, “Look at that (expletive) dog.  I want it to go away.”  So initially, you may be reinforcing this less-than-optimum reaction—even though it’s under threshold.  However, with repetition you will notice your dog’s stress level reducing.  Continue marking and rewarding your dog for looking at, and not reacting to the trigger.

When you see your dog is relaxed, have your helper move in a bit closer—but not too much!  Continue reinforcing your dog’s interest and calm behavior.

Initially keep your training sessions short.  It’s better to end too soon rather than work a bit too long so your dog tires, and reacts.  You may even notice that your dog turns his back to the trigger–as if he’s trying to “pretend” it’s not there.  That’s a clear indication that your dog has reached his limit.  As much as possible, end your session on a high note having achieved success–no explosions and your dog has started acclimating.

Gradually work with your helper to decrease distance.  The next step will be adding movement—gradually decreasing distance, always making sure your dog is getting more relaxed and reinforcing the goal behavior.  Here are the progressions we generally follow, always reinforcing the dog for looking and offering the behavior we want:

Change dogs—have a different helper and dog work with your set-up training sessions.  You most likely will not have to start at the beginning, but again, make sure your dog is under threshold and you’re focused on creating a positive emotional response:  Dog = Good!

Once you start training, and for the rest of your dog’s life, it is important that your dog doesn’t “practice” the behavior—that he isn’t experiencing success by exploding.  This means doing your best to prevent your dog being in a position to react.  For some dog owners, this means walking their dogs at times when they will be unlikely to see another dog.

But despite your best efforts …

Accidents happen.  You may turn a corner and suddenly right in front of you is another dog, and that dog reacts … which sets your dog off.  Here’s what NOT to do—Do not punish your dog!  Think about all the work you’re putting into teaching your dog that the sight of another dog is not harmful to him.  The last thing you want is to remind him that you’ll punish him when he sees a dog—even though in your mind you’re reacting to his behavior, not to seeing another dog.  But your dog doesn’t know that.

How you handle an “oopsie” will depend on where you find yourself.  It may be that the simplest way to extricate yourself from the situation is to retreat.  So just retreat.  It may be that the owner of the other dog retreats, so you can just stand still.  In any case, chalk it up to an accident, and get back to your training.

If you aren’t having success, don’t have a helper, or for any other reason want help from a behavior trainer, be sure that whoever you work with does not use punishment, including punishing equipment such as a prong collar.  Make sure that any trainer you work with has the same goal as you do.  That is, “Trigger = GOOD!”  For information on our All Dogs Gym behavior programs, click here.