You are here: Home / Behavior / Teaching an “off” switch

When you're done petting or playing. 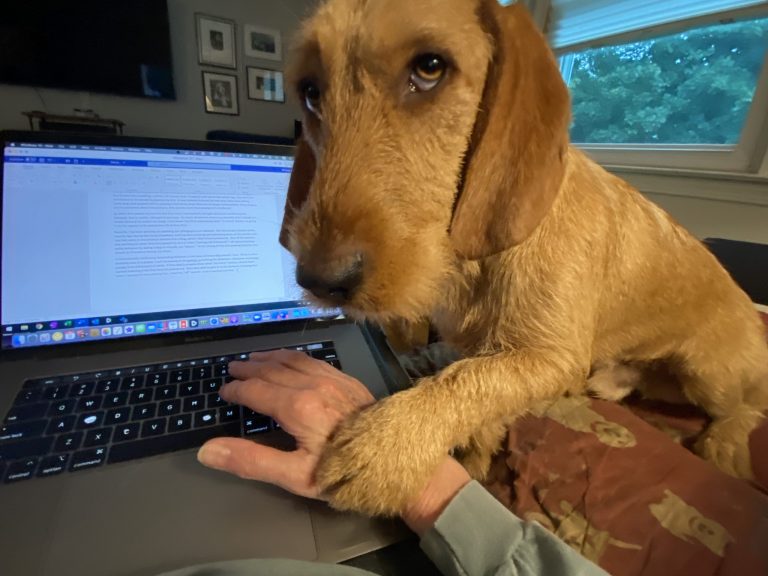 One of the things I teach all my dogs is that when I say “No more,” it means I’m done petting.  When I’m playing with them, such as tossing a ball, or playing tug o’ war, I say “All done” which means I’m done playing.

Teaching your dog to understand an “off switch” is easy if you’re consistent.  The most important part of these lessons is to mean it and follow through.  For example, when I’m done petting, I say “no more” and cross my arms so my hands are inaccessible and I can’t pet the dog.  If the dog paws my arm, I may repeat “no more” (in the same calm tone of voice), but I won’t start petting again.  When we’re playing and I want the game to end, I’ll say “all done” and walk away.  After just a few repetitions, dogs get the idea.

Having my Basset Fauve de Bretagne puppy, Brio, has reminded me of the importance of these lessons.  Being a hound, Brio easily finds things to entertain himself—after all, life is full of smells to investigate.  But he also likes cuddling—which I, of course, love!  It wasn’t until he was about ten months old—a teenager!—that Brio first demanded to be petted by pawing my arm.  It was notable because he had never done that before.  Some dogs and puppies will try pawing a few times when they are no longer being petted, and as long as you’re consistent about not giving in, they quickly learn that pawing isn’t reinforced.

So when Brio pawed my arm for the first time, I momentarily thought about not reinforcing this behavior, but in reality, I thought it was cute.  So much of what Brio does is so adorable that I indulge him simply because he makes me laugh.  But I also knew that Brio understood what “no more” means, so giving in to his request to be petted was OK at that time.  I knew he would stop his demand if I told him to.

It just so happened that when he pawed my arm, I was writing an article on teaching polite behavior.  About a year ago during the Covid slowdown, we did a major revision of our website (alldogsgym.com), and I’ve been revising and uploading many of the articles and tips that were in the previous version into a Blog.  One of the articles I was working on when Brio asked to be petted is titled “Earning Life’s Rewards”—all about teaching polite behavior by asking a dog to virtually say “please.”  Brio’s timing of this first pawing behavior was almost as if he were testing my thesis.

Unintentionally reinforcing demanding behavior is the bane of many dog owners’ lives.  What is often adorably cute in a puppy—such as pawing to be petted, or barking for attention—becomes annoyingly uncute in an adolescent or adult.  If Brio didn’t already know what “no more” means, I would have started teaching it the first time he pawed me.  But I was able to give in to his demand, knowing that when I wanted to stop petting him, I had the “off” switch—and it worked just fine.

One caveat:  If you’ve been unintentionally reinforcing attention-getting behavior and you’ve decided to eliminate it, once you start persevere!  No matter how annoying your dog gets—and chances are he will escalate his annoyingness—do NOT give in to it.  Once you have said “No more,” if necessary get up and walk away rather than giving in to your dog’s pawing or barking for attention.  If you give in even once, you’re sunk!  The result is that you will have taught your dog to persevere himself.  And he will!