You are here: Home / Training / Your dog’s adolescence – Part 1 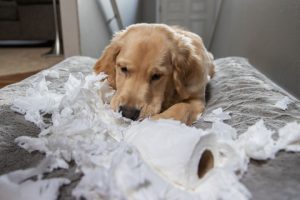 I recently read an article in “The Whole Dog Journal” entitled, “Canine Adolescence: The Great ‘Unconsidered’ Life Stage.”  Both the title and much of the text made me smile.  To quote: “… few people talk about the phase of a dog’s life that humans find the most challenging and frustrating: the “teenager” phase, when the behaviors that our adorable puppies have been performing on cue for months suddenly seem to be missing from our adolescent dogs’ memory… and when so-called “nuisance” behaviors like escaping confinement, barking, fence-fighting, and chewing furniture start emerging.”

Why was I amused by this?  Well, perhaps amusement is not correct.  But I have been writing books and articles about the changes in the adolescent dog’s behavior for over 30 years.  Nine years ago, I wrote about Larry’s adolescence.  Here’s part of what I wrote back then, with some edits to bring it up-to-date:

Our Chinook puppy, Larry, and I have been attending Puppy Classes for the past eight weeks.  Two weeks ago in class we were working on a behavior that Larry had been performing beautifully for several weeks.  I gave him the cue, he looked at me and did nothing.  Well, he didn’t actually do nothing.  He very obviously blew me off.  Leisl, our Instructor, looked at me and laughed.  She knew that Larry’s lack of response was just the first sign of things to come—adolescence!

Teenage behavior in dogs is not unlike teenage behavior in humans.  Human adolescents test the parameters of “accepted” behavior.  They have selective hearing, ignore what their parents want, and occasionally do something totally brainless.  Dogs do all this plus a new dimension of regressions: occasionally reverting to puppy behaviors we thought were gone such as renewed chewing, mouthiness, and possibly even housetraining.

While I still see glimpses of the compliant, sweet puppy that was Larry just a few weeks ago, he is definitely becoming a teenager.  As if his personality changes aren’t enough, his gangly body—seemingly growing taller overnight—is definite proof that Larry is no longer an adorable little puppy.

When I attended my first training classes in 1970’s, most classes didn’t take dogs younger than six months of age.  One reason for this was that popular training methods at the time relied on harsh collar “corrections” that were unsuitable for training a puppy.  Owners didn’t mind waiting to start training because puppies are compliant and easy-to-live-with.  With the exception of housetraining and mouthing—two things that aren’t addressed in a typical “adult” training class—most dog owners are able to deal with a young puppy’s behavior without needing formal training.  That is, until the dreaded teenager emerges.

Starting sometime between four and six months of age, a number of changes occur, one of which is called the “flight instinct period.”  This is a normal occurrence when a puppy suddenly fails to come when called.  Prior to this, the puppy readily came when called with no hesitation.  The minute the flight instinct period rears its ugly head, the puppy doesn’t respond, and may even run away, exploring beyond his previous, self-imposed boundaries.  A puppy that was sticking close to home, and didn’t even need to be kept on leash in an unfenced area, is suddenly testing the boundaries of his world (literally), by running off if he has the opportunity.

Starting in the late 1970’s and ‘80’s, there was a growing recognition of the importance of early socialization and training.  At the same time, training methods that relied on “reinforcement” rather than “correction” meant that young puppies could safely start in training classes.  That’s great!  But it’s not the end of the story.

Many owners, completing a six or eight week puppy or basic training class, think that the puppy that was easily trained and responsive will maintain this same level of compliance and willingness as he matures.  Unfortunately, that just ain’t gonna happen!  We try to prepare owners for what’s about to happen, which is what I had just started to go through with Larry—adolescence.

The training in a Puppy Class is a great foundation but it is not enough training for a lifetime.  It is really important to continue training into and through the “terrible teens” to have a well-trained dog.  We encourage our Puppy Essentials and Basic Manners class graduates to continue training without taking a break.  I’ll tell you why next time.