You are here: Home / Behavior / Your Dog’s Adolescence – Part 2 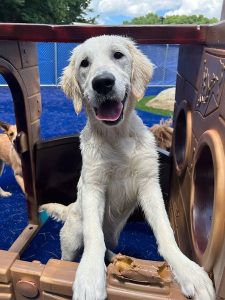 I sometimes wonder if we should include an alert in our Puppy Essentials Class for puppies up to five months of age and the four and five-month old puppies who take our Basic Manners Class.  It would be something like this:

You know how responsive and trainable your young puppy is?  Your puppy is cute, small enough to pick up, sticks close to you, learns easily, and so much fun.  This will not always be the case. In just a few weeks your puppy will be a gangly teenager.

You may not believe it now, but at some point in the future you may even consider giving your teenager away.  Why?  Because adolescent dogs are no longer the cutest things ever.  They are too big to pick up, and suddenly start exhibiting new and surprising undesirable behaviors that you haven’t seen yet, such as destructive chewing, running away, and not listening to you even though you’ve spent time training.  You probably thought a session of training for your puppy would be enough.  It’s not! You can avoid and mitigate many pitfalls by continuing training your dog through adolescence.

We sometimes hear from students who graduate from a Puppy or Beginner class that rather than signing up for the next level of training, they want to take some time off to practice and “perfect” what they’ve learned so far.  This is a really bad idea for several reasons.

The teenage dog’s brain is not yet fully formed—and neither is his body.  Adolescent dogs go through growth spurts, hormonal changes, increased distractibility, enter a destructive teething period, and even a fear period.  They are more active than they were as puppies, and require more attention, exercise and enriching activities (like training).

Without sufficient training, adolescent dogs can develop behavioral issues.  In fact, the majority of dogs that are relinquished to shelters because of problematic behavior are between five months to three years of age.  In other words, problems start with teenagers, and they don’t automatically out-grow them.

While a graduating student may think they’ll continue training without attending a weekly class, they rarely do.  It is human nature to put off practicing a skill without having an incentive such as keeping up with the rest of the class.

The pre-adolescent puppy is still relatively easy to cope with, but the further you get from regular practice, the less responsive your dog will be.  Without the commitment of attending a class, we all tend to relax and fall out of practice.  But even more importantly, nothing will improve your dog’s training skills more than progressing and moving ahead.

We once read a story about a violin student who studied with “the master.”  Giving him an exercise book, the maestro gave the student an assignment to practice during the week.  Because it was an advanced class, the assignment was difficult.  The student struggled through practice over the week between classes, never quite becoming as accomplished as he felt he should be.

At the second lesson, the student worked through his practice assignment, still feeling he should be doing better. Yet at the end of the lesson, the master turned to a new page, giving the student a new, challenging assignment, despite his ineptness and lack of proficiency with the previous week’s work.

This continued throughout the student’s lessons, each week getting a new, more challenging assignment even though the student never felt he had successfully performed the previous lesson.  The student even considered dropping out because he never felt as if he was good enough for the maestro.

But the end of six weeks, the maestro turned back to the first lesson in the exercise book.  Even though he had not practiced it, the student played it flawlessly.  The same with the 2nd lesson, and the 3rd, and so on.

The moral of the story:  It is by growing that we become skilled.  We don’t get better standing still.  And neither will your dog.  It is through teaching new, fun behaviors that your dog’s responsiveness will improve even with the behaviors you may not have time to practice.

Puppyhood and adolescence form the behavioral foundation for the rest of your dog’s life.  Spending a few extra weeks creating the firmest foundation will hold your dog in good stead for many years.  And who knows?  You may even enjoy advanced training so much that you become a trainer yourself.  That’s exactly how most of us got started.